It is a little know fact that the largest Japanese immigrant population is located in Brazil where Japanese immigrants started their immigration in 1908. Today, there are over 1.4 million Japanese Brazilians in the country. With so many Japanese in Brazil, it was inevitable that samba would enter into Japan at some point and in 1980, the first samba parade took place. 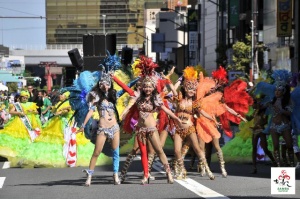